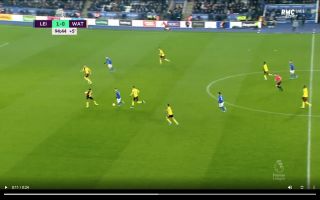 The 23-year-old picked up the ball and immediately nutmegged Adrian Mariappa before charging towards the goal.

The ace remained cool, calm and composed enough to drill the ball into the bottom corner to seal a victory for Brendan Rodgers’ side.

According to ESPN, the playmaker is one of five Premier League stars that Manchester United are targeting a move for in the near future.

Take a look at the England international’s superb goal below:

Back to second in the @PremierLeague ?

Here’s how some United supporters reacted to their reported target’s lovely goal:

Get maddison at OT now

Maddison is establishing himself as one of the best playmakers in the Premier League with his phenomenal performances so far this season.

Ole Gunnar Solskjaer’s side look as though they are lacking a quality attacking midfielder, Maddison would be an ideal signing for the Manchester outfit as they look to improve their creativity from the middle of the park.

The starlet is also becoming a regular member of Gareth Southgate’s England squad and he has the tools to be a key player for the Three Lions in next summer’s European Championships.