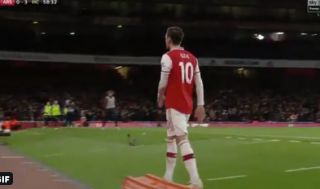 Arsenal star Mesut Ozil did not look happy as he was subbed off against Manchester City today.

Although he didn’t react quite as badly as Granit Xhaka did in the infamous incident against Crystal Palace, Ozil can be seen kicking out in frustration in the video below from Sky Sports.

Not the best of days for Mesut Ozil ?

Man City still lead 3-0 against Arsenal and look good value for their lead.

The German playmaker had a quiet game, though can hardly be singled out for blame when this whole Arsenal side has been in disarray for so much of this season.

The Gunners are currently 3-0 down at home to City and it never really looked like a contest at any point.