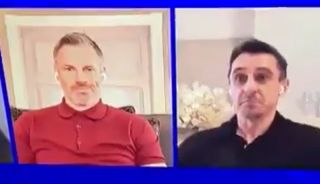 Gary Neville couldn’t hide his amusement as his fellow pundit Jamie Carragher was asked a question that referenced the utter disrespect of spitting at someone.

The former Liverpool man was notably filmed spitting at someone from his car back in 2018, as the video below shows…

While Carragher was not being pressed about this issue specifically, the former England international did make a bit of an awkward face, causing Neville to crack up a bit.

Watch this hilarious clip below as it’s clear, once again, how much Neville enjoys winding Carra up at any opportunity!