A heart-breaking clip has now emerged showing that Antoine Griezmann was on the verge of tears as he walked off the pitch at the halftime point of Barcelona’s La Liga encounter against Real Betis.

Griezmann, who has endured a difficult time since his big-money move to Barcelona from Atletico Madrid last summer, missed a penalty for the Blaugrana in the 32nd minute.

With the encounter all-square as the halftime whistle blew, Griezmann headed towards the tunnel and looked distraught and on the verge of tears.

Griezmann doesn’t need to be so harsh on himself, Claudio Bravo – a well-renowned penalty specialist, stopped his spot-kick with a brilliant save.

It shows just how strong Griezmann is as he managed to keep it together in this moment, the Frenchman’s resilience was rewarded as he scored just three minutes into the second-half.

Substitute Lionel Messi unsurprisingly changed the game when he came on after the break, with the all-time great’s fantastic dummy leaving Griezmann to score a tap in. 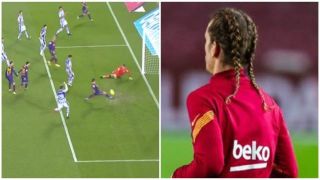