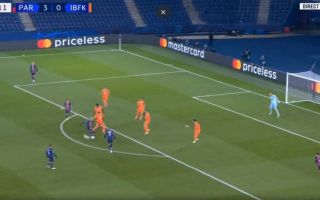 Neymar has his hat-trick goal against Istanbul Basaksehir – and what an absolute peach of a strike it was.

The Brazilian found the back of the net just six minutes after the restart, nutmegging a Basaksehir defender before releasing a sumptuous strike into the top corner. The goalkeeper was unmoved.

He wasn’t done there, though. Neymar finished a free-flowing PSG move, squeezing the ball under the goalkeeper, the give the French giants some daylight in the contest.

After winning his side a penalty, you would have thought Neymar would grab the ball and convert for his hat-trick. But, unselfishly, he allowed Kylian Mbappe to bag his first Champions League goal this calendar year.

Such is his confidence, Neymar probably backed himself to score a third later in the game, which he did – and how. Have a look at his absolutely brilliant hat-trick goal.

What a performance. When he’s playing like this, there’s scarcely a player better than him anywhere in the world.