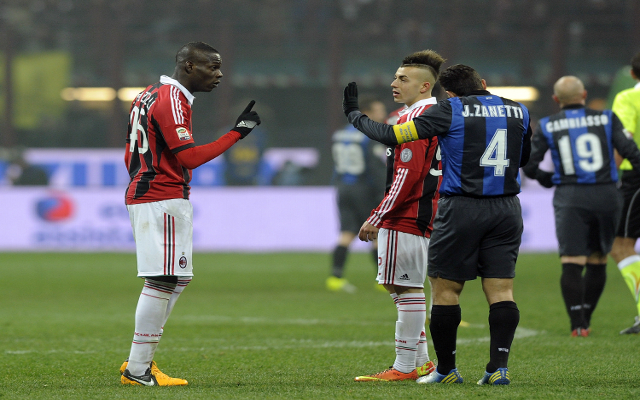 Inter and AC Milan shared the spoils in the Milan derby.

AC Milan striker Mario Balotelli missed a handful of chances in his first derby in over three years as the Rossoneri shared the spoils in a 1-1 derby draw with hosts Inter Milan here Sunday.

Milan took a 21stminute lead through striker Stephan El Shaarawy and dominated throughout before ultimately lamenting their earlier misses when Inter midfielder Ezequiel Schelotto levelled in the 71st minute.

Inter were given a pre-match boost with the inclusion of central defender Andrea Ranocchia, who had been an injury doubt all week.

Yet despite Milan’s 1-0 defeat to the Nerazzurri at the San Siro earlier in the campaign, the visitors started the second ‘Derby della Madonnina’ as firm favourites having stunned Barcelona 2-0 in their Champions League first leg here last week and climbed up to third place in the table.

However, the visitors spurned the first of several clear chances, Balotelli slipping in front of goal after Kevin Prince Boateng had left Mattia De Sciglio’s cross from the left wing at his feet.

At the other end forward Rodrigo Palacio should have done better with an angled strike that went well side of Abbiati’s far post.

Milan began to dictate play and were finding options down the left where De Sciglio’s long runs were giving the hosts trouble.

When former Milan striker Cassano lost possession in midfield, Boateng collected and coolly sent El Shaarawy through to beat Handanvoic with an angled shot with the outside of his boot.

Milan threatened again when Balotelli rose to meet a corner from the right which had Handanovic scrambling for the ball on the goalline.

Balotelli’s third clear chance followed moments later when he toe-poked a probing ball into the box only for it to be cleared.

Handanovic easily collected Balotelli’s header from Ignazio Abbate’s cross from the right but on 40 minutes the ‘keeper was at full stretch to parry when Balotelli thumped a freekick from 30 metres out.

Milan threatened from the outset of the second half, Boateng flashing a header wide from Montolivo’s freekick on the right after El Shaarawy had been hauled down.

Freddy Guarin gave Inter’s fans hope when he first-timed Palacio’s whipped cross in from the right only for Abbiati to pull off a superb save at full stretch.

On 57 minutes Balotelli flashed a header wide from a freekick but was left far more frustrated when Handanovic bravely blocked as the striker got in close to try and prod the ball home from a cross on the right.

Milan were still dominating, but the visitors were stunned in the 71st minute when Schelotto got on the end of Yuto Nagatomo’s cross to stun Abbiati only two minutes after replacing Cambiasso.

Inter had the momentum and moments later Palacio’s header to the right of Abbiati’s goal had the keeper scrambling, although at the other end Muntari sent a looping shot just to the right of an outstretched Handanovic.

Milan regrouped to dominate the final quarter hour, with El Shaarawy’s ambitious bicycle kick blocked and then M’Baye Niang, who replaced Boateng with 10 minutes to go, seeing his low strike meet traffic in the area.

However the Rossoneri were lucky not to suffer a late Inter goal against the run of play when Palacio saw a header go close.