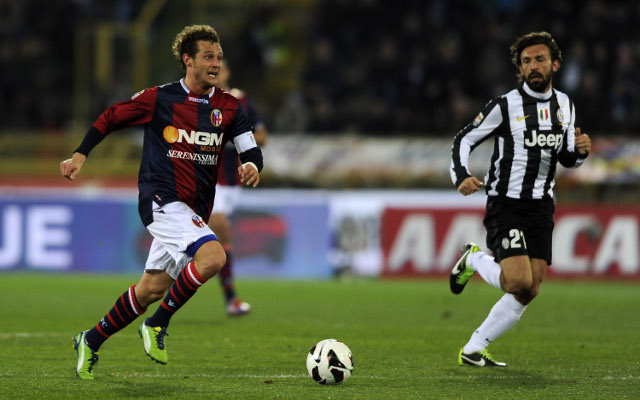 Serie A leaders look to bring Italian striker to the Old Lady.

Juventus are ready to make a move for Bologna’s Alessandro Diamanti according to Goal.com.

The Serie A leaders are keen to bring in a new striker this summer as they look to re-establish themselves amongst the dominant forces in European football.

The club have already announced that Spanish international Fernando Llorente will be joining the club this summer.

Llorente will arrive in Turn on a free transfer once his current deal with Atletico Bilbao expires at the end of the season.

The minimal cost incurred in brining Llorente to the club has freed up some funds for Juventus who are keen to splash the cash on bringing in a strike partner for Llorente.

They have now turned their attentions to Diamanti after being priced out of a move for Liverpool’s Luis Suarez.

Juventus and Diamanti’s club Bologna enjoy a good relationship with each other having exchanged a number of players in recent seasons.

The clubs have opened informal talks with Bologna looking for a fee in the region of £8 million for the striker.

Juventus are thought to be reluctant to pay over the odds for a striker who turns 30 in May but Bologna are in a position of strength with Diamanti currently under contract until 2017.