Man United are set to conduct a massive bid for Juventus pair Paul Pogba and Arturo Vidal according to Italian source CalcioMercato.

Old Trafford boss David Moyes will be handed a significant transfer war-chest this summer and will offer €72m (£59m) for the midfield duo, an offer that Juventus may struggle to turn down.

Moyes may well see his current midfield options as something of a ‘problem area’ much in need of improvement and a move for the Turin based players would certainly go some way to addressing the issue.

Pogba left Man United for Juventus in 2012 and has proven a pivotal performer in Antonio Conte’s side and the 20 year old, who left the Premier League side for nothing, will cost as much as £30m to re-sign.

The French international may perhaps be ready to consider a move back to Man United having seen Juventus fail to make in roads in the Champions League for the second season in a row and the rangy midfielder would certainly provide some much needed impetus to the centre of David Moyes’s side. 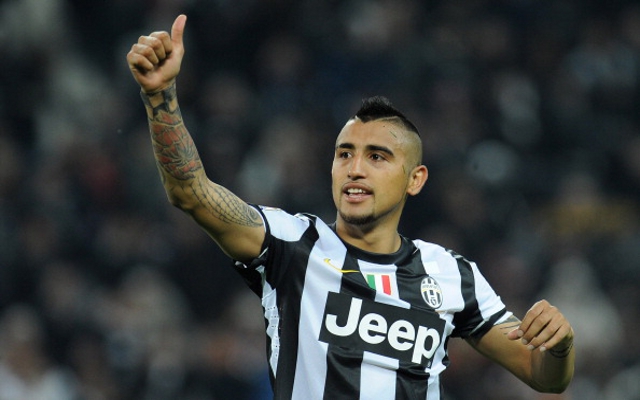 26 year old Chilean Vidal has also been a massive hit in Turin, winning Juventus’s Player of the Year award last term as he put in countless sterling performances to help the club to another Serie A title.

In 105 appearances for the Italian giants Vidal has racked up an impressive 37 goals and 20 assists.

Moyes opted to loan out Brazilian flop Anderson and there is a big question mark over Tom Cleverley’s future at Man United after a very average season from the England man.

Ryan Giggs may well elect to hang up his boots in the summer and summer signing Marouane Fellaini struggled to impress prior to his being sidelined with injury.

Indeed Moyes has been fortunate to see both Darren Fletcher and Michael Carrick return to fitness to at least provide some quality in the centre of the park and one can see why Man United would target reinforcements in the summer.