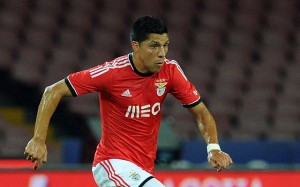 The Daily Mirror are also reporting that United are poised to rival Valencia in their bid for Argentine midfielder Enzo Perez.

Valencia have made a £20 m move for the World Cup star, but the rebuilding Reds are pondering a last-gasp intervention.

The 28-year-old recently signed a new four-year deal at the Portuguese side after an impressive season, and has also impressed Old Trafford scouts who are on the hunt for more midfield targets.