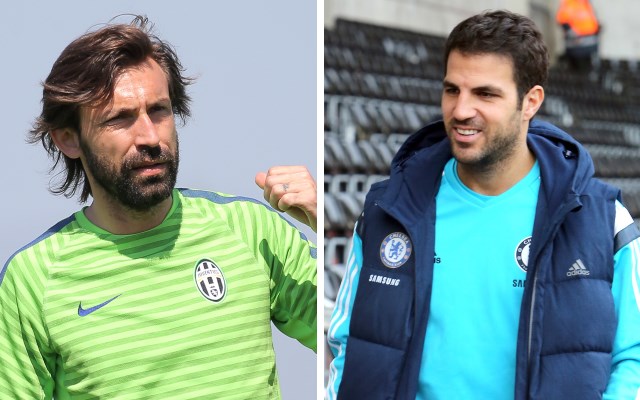 Chelsea have been linked with a summer move for Juventus playmaker and Italy icon Andrea Pirlo, but how does the veteran compare with current Pensioners midfielder Cesc Fabregas?

The transfer would certainly be something of a fantasy signing for the Stamford Bridge.

While 35-year-old Pirlo is surely past his prime, he remains a class act and a technical master of the highest order.

The veteran was inexplicably released by AC Milan on a free transfer four seasons ago, and has gone on to inspire Juve to a quartet of Serie A titles—a thoroughly remarkable achievement.

However, it was recently suggested that the World Cup winner believed that Juventus had reached the end of their cycle and would be open to moving abroad for the first time in his career.

Could he still cut it at Chelsea, and how would he compare to Chelsea’s current incumbent deep-lying playmaker Fabregas?
It’s hard to see Mourinho replacing the Spaniard.

The former Barcelona man has been critical to Chelsea’s title success this season, and has topped the Premier League assists chart with 17 direct contributions to goal this term.

Fabregas has also scored three goals in 31 starts—a far more impressive record than Pirlo, who has managed five assists and four goals this term—albeit in fewer games (18) and from a deeper starting position.

Intriguingly, Fabregas also sees more of the ball than Pirlo, averaging 82.8 passes per game [via WhoScored] compared to 73.3 for Pirlo. It is worth noting, though, that the Italian’s pass-success rate of 88.9 percent is better than Fabregas’s 85.3 percent.

Considering Fabregas is seven years younger than the Italian, there is surely no question of the legendary Pirlo replacing him. The Italian could never do Nemanja Matic’s job, which would surely leave him sitting on the peripheries of Jose Mourinho’s squad.

The presence of Fabregas makes it hard to conclude that Pirlo would be able to make a consistent, key contribution for the West London side next term.