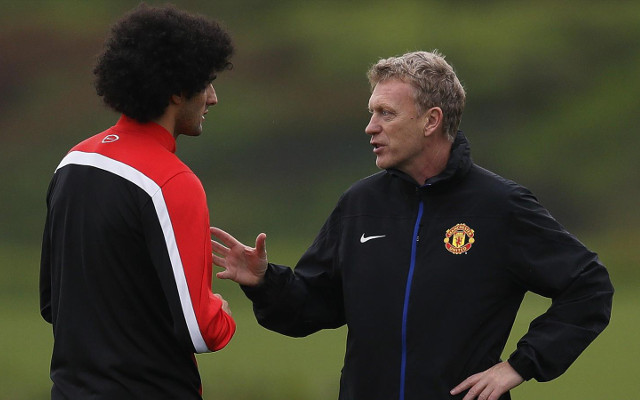 The 52-year-old struggled tremendously with the pressure of leading Manchester United, and the season turned out to be the worst ever in their history.

The pair had a close relationship from their time at Everton – with Moyes making the Belgian his only major signing in the summer the Scotsman was appointed manager of the Premier League giants – in a whopping £27.5m deal.

Fellaini has found a new lease of life under new boss Louis van Gaal, but admits that he was left in tears by Moyes’ sacking.

He said, “I was sad when he went,” as quoted by the Daily Star.

“I came into the canteen and saw him in a suit instead of his tracksuit. He called me into his office and told me,” he added.

“There were tears and that is normal, I am human. I worked six years with him. He was not a second father, but almost. He helped me a lot.”

The 27-year-old was heavily criticised in his first season at Old Trafford, and reveals that it was a difficult time in his career.

“The team was not performing and was losing matches stupidly. When things went wrong, it was Fellaini’s fault.”

Nonetheless, Fellaini has become a regular under Louis van Gaal this term, with his goals against Tottenham Hotspur and Manchester City looking to have won over the Red Devils faithful.

Manchester United take on Crystal Palace on Saturday, and if fifth-placed Liverpool lose to Premier League champions on Sunday, a top four spot will be secured.