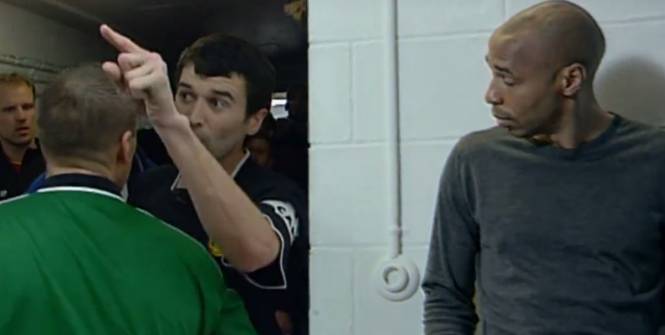 Arsenal legend Thierry Henry has recreated some of the magic of his playing career by playing a starring role in the latest Sky Sports advert.

In their latest publicity piece to hype up the new Premier League campaign, Sky Sports have taken a trip down memory lane and presented a series of unforgettable clips from the past two decades of English football action since the EPL’s formation.

All of your favourites stars are there; Eric Cantona, Steven Gerrard, Sir Alex Ferguson, Tony Yeboah, while the ageless Henry is present for every magic moment.

Not only is the Arsenal star—who demonstrated his effortless class on British tellies with his series of va-va-voom adverts for Renault—present for every glorious moment, but he even interacts with the key protagonists.

The Frenchman was there as well during Roy Keane and Patrick Vieira’s infamous bust-up in the tunnel, and he was present—among the Manchester City fans—when Sergio Aguero won the league for the Citizens.

Response to the advert has been largely favourable; here are some of our favourite Twitter comments.

Brilliant Sky advert. Only backs up my belief the Premier League is the best league in the world. http://t.co/OuqunP96r0

Believe the working title for the Thierry Henry advert was “the Premier League: forget the last two seasons.” https://t.co/Ug4u1wOme4