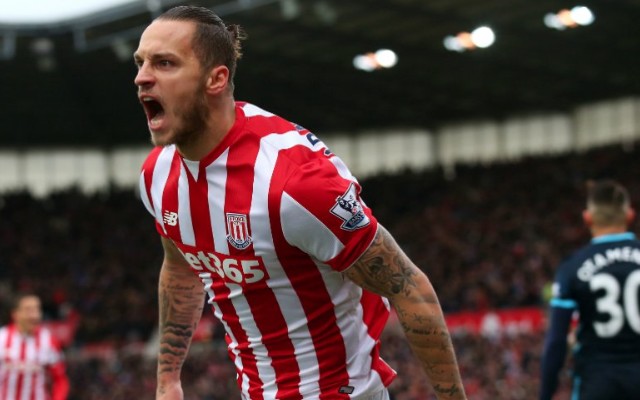 Marko Arnautovic scored twice inside the opening 15 minutes, as Xherdan Shaqiri stole the show with both assists.

Man United and Arsenal can move ahead of first-placed City by beating West Ham and Sunderland later today, while Spurs and Liverpool can close to within one and three points respectively if they win their matches this weekend.

Leicester City will also have been buoyed by this surprising result. The over-achieving Foxes can reclaim top spot and go three points clear of Manuel Pellegrini’s men if they defeat Swansea in South Wales this afternoon.

Stoke, who temporarily climb to ninth following their early-afternoon heroics, displayed their attacking intentions right from the start. Mark Hughes picked a very offensive XI, which seemed to unsettle the visitors early on.

It took the Potters just seven minutes to break the deadlock. Shaqiri left Fernando on his backside during a mazy run down the right flank, which then saw him outfox Aleksandar Kolarov, before crossing into the path of Arnautovic, who rifled home his fourth Premier League goal of the season.

Arnautovic’s fifth league goal of the 2015-16 campaign followed swiftly after his fourth.

Again, Shaqiri was the provider. The Swiss playmaker slid a perfectly-weighted pass through to the Austrian, who slotted cooly past Joe Hart to make it 2-0.

The first half witnessed one excellent chance for Kevin De Bruyne, who was denied by a good save by Jack Butland.

However, the best opportunity to score the game’s third goal before the break fell to Arnautovic, who – on a hat-trick – struck the post when one-on-one with Hart.

Stoke were the better side in the second half too.

As frustration grew, anger got the better of Nicolas Otamendi. The Sky Blues centre-back picked up a yellow card for an ugly hack on Shaqiri, after the former Bayern Munich and Inter Milan man had embarrassed him with clever turn.

Former Premier League referee Howard Webb, who was working as a pundit for BT Sport, suggested the Argentine defender was slightly fortunate to only see yellow, because the tackle “could be seen as a violent act”.

Stoke should have made it 3-0 in the 68th minute when the game’s three star men linked up. Bojan played in Arnautovic, who opted against shooting and instead squared towards Shaqiri, but he was unable to make contact as the ball rolled across the six-yard box.

Bojan then came close to scoring himself, only for Martin Demichelis to clear off the goal-line.

Man City’s hopes of mounting a comeback were dealt a fatal blow 17 minutes from the end as Fernandinho limped off with a hamstring injury. Pellegrini had already made three subs, so the away side had the complete the match with ten men.

Stoke City’s clean sheet means that the Potters are still yet to concede a Premier League goal this season when captain Ryan Shawcross has been on the pitch.