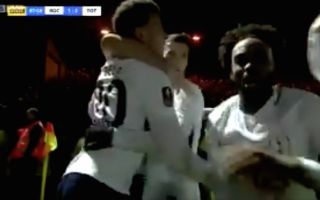 Tottenham were held to a surprise 2-2 draw by Rochdale in the fifth round of the FA Cup after late drama.

The League One side currently sit at the bottom of their devision and were given little chance by many going into today’s fixture.

However, late drama ensured that the League One side were able to rescue a heroic replay at Wembley.

Harry Kane had looked to have given Tottenham a late winner on the 88th minute when he converted a late penalty shortly after being introduced to the action.

Upon the goal Danny Rose kissed the camera before shouting ‘Ryan Mason’.

Mason notably retired from professional football this week after sustaining a life-threatening head injury while playing for Hull City last season. Rose took the opportunity to pay homage to his former Spurs teammate with Mason having risen through the ranks at the North London club from a young age.

Mason responded quickly on twitter and showed his appreciation for Rose’s celebration.

Likewise, many Spurs fans were full of praise for Rose’s celebration.

Absolutely loved that from rose

Haha that was a great moment