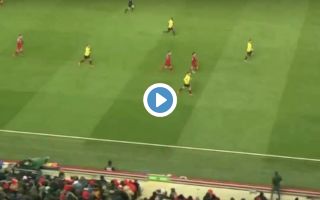 Mohamed Salah delivered another standard day at the office for Liverpool with the Egyptian registering a colossal four goals against Watford.

Salah had yet to have registered a hat-trick for Liverpool this season and today was no different with the Egyptian unhappy to settle on three goals and instead registering an astonishing four.

Salah’s form in the 2017/18 season since signing from Roma to Liverpool has been breathtaking to say the least.

Today’s handful of four goals brings Salah’s total for Liverpool this season to 36 goals in just 39 games. The figures that he has achieved already this season are unheard of for a striker in March – let alone a winger.

While it is hard to take anything away from Liverpool’s talisman it has to be said that Watford were disappointing to say the least during their visit to Anfield.

Watford were pegged back by Salah’s opener on the fourth minute and looked helpless from there on in.

Salah has now eclipsed the likes of Luis Suarez and Fernando Torres to become the highest-scoring Liverpool player in a debut season.

Further, Salah is now the top league goalscorer across all of Europe’s top five leagues.

Roberto Firmino was the only other Liverpool player to get on the scoresheet for Liverpool during the 5-0 win with the Brazilian scoring four minutes after half-time on the 49th minute.

While Salah’s first goal was perhaps the pick of the bunch for the winger, his fourth was a gift from Watford goalkeeper Orestis Karnezis who spilled a Danny Ings effort into the feet of Salah’s on the 85th minute. You can watch the final goal in Salah’s individual demolition of Watford below.