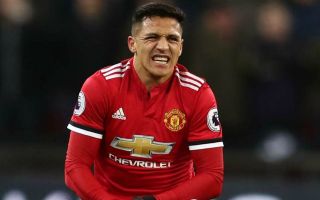 Alexis Sanchez has posted on Instagram after his difficult start at Manchester United and the caption for his latest photo is revealing.

The 29-year-old, who joined from rivals Arsenal in January, is currently on international duty with Chile in his first chance to escape from Old Trafford since he joined.

It’s fair to say Sanchez’s form so far has been well below expectations and some fans are already turning on him as he looks a waste of both money and effort by the club.

Still, this latest social media update from the player suggests he’s simply exhausted after a protracted transfer saga and a switch to a new club in the middle of the season, which is hardly ideal.

Sanchez also didn’t get much of a break in the summer as he was granted a slightly later return to Arsenal training after representing Chile in the Confederations Cup.

The South American forward is known for running himself into the ground somewhat and he’s showing no signs of slowing down with this latest message.

He wrote: ‘I know you’re tired. I know you are psychologically and emotionally exhausted. BUT YOU HAVE TO SMILE AND CONTINUE.’