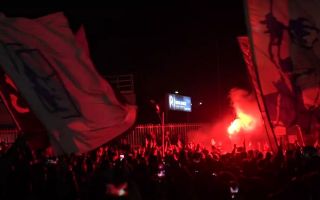 Napoli secured a huge win over Juventus on Sunday night, as they moved to within just a point of their Serie A title rivals with just four games remaining this season.

Kalidou Koulibaly left it late in Turin, scoring in the last minute of normal time to seal the win for his side and silence the home crowd in spectacular fashion.

That now sets up a thrilling climax to the Scudetto race, as Juventus still have to play both Inter and Roma away, and so they will be under intense pressure not to slip up again.

However, while this was a massive win for Maurizio Sarri and his men, they can ill-afford to get complacent as they have difficult fixtures of their own and will be desperate to avoid this becoming a premature celebration.

Nevertheless, given the magnitude of the result and what it means to the club, it’s no surprise that fans flocked to the airport in Naples awaiting their return. According to La Gazzetta dello Sport, there were over 10,000 supporters up until 3am, and so that goes to show what this win and title push means to them.

It remains to be seen if Napoli can go on and leapfrog Juventus, but their fans will have loved every moment of Sunday night’s win.