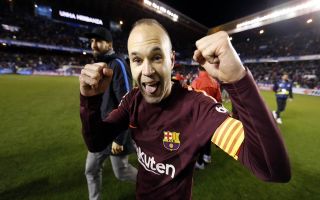 Andres Iniesta has confirmed that he will leave Barcelona at the end of the season, and it’s claimed he has quite the wage packet waiting for him.

As noted by BBC Sport, the 33-year-old announced in an emotional press conference last month that he would leave the Nou Camp this summer after a glittering spell with the Catalan giants spanning over two decades.

Having signed off with another La Liga title and Copa del Rey, he’ll be hoping to be part of one last bit of history as a Barcelona player by guiding them to an unbeaten season with just three games remaining this year.

While there has been no confirmation of his next destination as of yet, ESPN report that the Spanish veteran could be on his way to Japanese outfit Vissel Kobe, with a whopping $30m-a-year deal waiting for him.

As he continues to edge deeper into the latter stages of his career, it comes as no surprise that Iniesta would consider a move away from Europe at this point as it also protects his legacy at Barcelona and avoids potential disappointments overshadowing his incredible achievements over the years.

However, with this report also in mind, the financial appeal of a move to the Far East is seemingly also a big factor as that’s a very lucrative offer that will certainly set him and his family up.

With Cadena Ser initially reporting that the Barcelona icon would be moving to Kobe, it remains to be seen if there is official word from the relevant camps in the coming weeks as an announcement on his future is expected either at the end of the domestic season or before the World Cup which gets underway in Russia in mid-June.