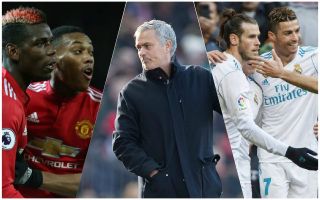 It could be all change at Manchester United this summer if recent transfer gossip from various sources is to be believed.

The Red Devils have just endured another disappointing season, finishing the campaign without any silverware and ending up a distant second behind Manchester City in the Premier League.

Jose Mourinho surely cannot be happy with the state of this squad as it’s reported he’s planning some big spending to go alongside deals that are already in place.

The club confirmed the signing of Diogo Dalot this week, while the official site also report they’ve agreed a deal to bring in Fred from Shakhtar Donetsk.

What next for United? It sounds like they could be busy, with some big names potentially heading out to aid the club in spending on fresh faces to deliver a squad more to Mourinho’s liking.

Here’s a selection of three rumoured players heading out and three targets who could head in that would reshape this team in a big way ahead of the new season:

After struggling for regular playing time last season and failing to make real progress under Mourinho, this could be the end for Anthony Martial at Old Trafford.

Tottenham are after attacking players and could now look at the France international after being priced out of a move for Wilfried Zaha, according to the Daily Mail.

Martial seems an ideal fit for Spurs and would surely see more starts in north London, with the Mail suggesting United could be prepared to let the player go if they receive as much as possible of the total of £58million they paid Monaco for him.

Replacing Martial in attack could be Real Madrid’s Champions League final hero Gareth Bale, if reports are to be believed.

The Wales international made it pretty clear in his BT Sport interview after that game that he wasn’t happy with his role at the Bernabeu last season, and said he’d likely sit down and sort out his future with his agent this summer.

The Daily Mirror report that Bale, who’d likely cost £100m, has informed Bayern Munich he’d rather move to the Premier League if he leaves Real, following Don Balon‘s report that the Red Devils had stepped up talks over the signing in the last few days.