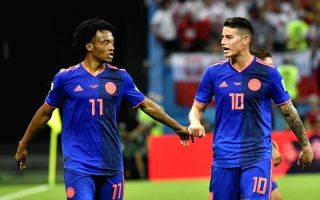 Although he hasn’t quite hit top gear at the 2018 World Cup in Russia, Colombia ace James Rodriguez will be key to their hopes of progressing past England next week.

Jose Pekerman saw his side bounce back from their opening game defeat to Japan with wins over Poland and Senegal to emerge as Group H winners, setting up a last-16 meeting with England next Tuesday night.

Rodriguez was a central figure for them four years ago in Brazil, pulling the strings in his creative playmaker role while also scoring some great goals.

As noted in the tweet below, the Bayern Munich ace has been involved in 10 of Colombia’s last 14 World Cup goals, which just reiterates how decisive he is for them.

However, they suffered a major setback in the win over Senegal, as the 26-year-old was forced off in the first half after seemingly aggravated a calf injury he has been struggling with.

Pekerman has addressed the situation, and it’s fair to say that he sounds concerned over whether or not he’ll have his talisman at his disposal against England, which would be a huge boost for Gareth Southgate and his men as their rivals would be without a very important figure.

“I am extremely concerned. It’s a tough situation for my team and a topic that could overshadow everything else,” the Colombia boss is quoted as saying by The Sun. “It’s not a comfortable situation for us. He trained normally yesterday, he was fully fit, no hint of injury.

“But right now I don’t know where he stands to be honest. Hopefully there will be good news after he has been for his medical examination.”

Colombia still have plenty of quality through their team, and so England will still have to be wary. Juan Quintero has impressed this summer and could be given more creative responsibility, while the likes of Juan Cuadrado and Falcao will be obvious threats to the England back-line next week.

Nevertheless, Colombia will be desperate to get Rodriguez back too in order to be at full strength.

Now he’s been forced off after 30 minutes in a crucial group decider. pic.twitter.com/mOK9yVnWdV