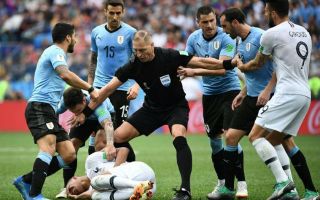 The stage is set for the World Cup 2018 final on Sunday with France and Croatia set to do battle.

Croatia have played three back-to-back 120 minute ties and they beat England in the semi-final 2-1.

The Croats did not appear to show any fatigue and, in fact, grew as they game went on and scored in the final 20 minutes and again in extra-time.

Meanwhile, Les Bleus progressed into Sunday’s showpiece event with a 1-0 victory against Belgium.

The French have shone in the knock-out stages and will be competing in the third final and their last came in 2006.

Who is the referee in the World Cup 2018 final?

The eagle eye will remember that in the 2006 final – where France lost to Italy after Zinedine Zidane was shown a red card – the game was officiated by Argentine referee Horacio Elizondo.

And now lighting has struck twice as FIFA have named another Argentinian referee.

2 – Nestor Pitana will become the 2nd Argentinian referee ?? to feature in a World Cup final ? after Horacio Elizondo in 2006. Memories. pic.twitter.com/oGMURuGySP

Nestor Pitana will referee for Sunday’s World Cup final between France and Croatia, according to Goal.

The 43-year-old is clearly esteemed by FIFA and was in charge of the tournament’s opening game between Russia and Saudi Arabia.

Croatia and France fans will remember that he was in charge for France’s quarter-final victory over Uruguay and Croatia’s last-16 clash with Denmark.

He will be flanked by assistant referees Hernan Maidana and Juan Belatti, as well as fourth official Bjorn Kuipers, as per the report.