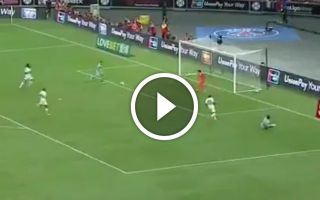 Arsenal took on Paris Saint-Germain in their International Champions Cup clash on Saturday, with Mesut Ozil breaking the deadlock early in the first half.

The Gunners are continuing their pre-season preparations with Unai Emery hoping to oversee significant improvement ahead of his first campaign in charge at the Emirates.

Ozil will likely be a key figure in his plans with the German playmaker’s creative qualities and eye for goal in the final third, and he showcased that in the encounter with Ligue 1 champions PSG on Saturday.

After Pierre-Emerick Aubameyang was found sprinting down the right flank, the Gabon international kept his composure to find his Arsenal teammate in the box and Ozil did the rest as he swept home the finish to find a breakthrough and hand his side an early lead.

Arsenal face Chelsea next week before kick-starting their league campaign at home against reigning champions Manchester City, and so these outings will be crucial for Emery to take a close look at his players and to determine who will form an important part of his plans moving forward.

For those that didn’t see Ozil’s goal.