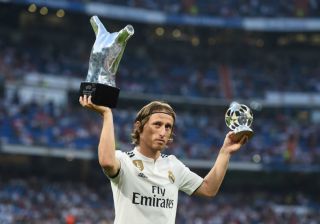 As Real Madrid look to bid goodbye to one of their best servants of the past few years, the knock-on effect to his potential move could be disastrous for Manchester United.

According to Don Balon, Luka Modric wants one last big pay day before he retires, and to that end, a two-year deal at Inter Milan is in the offing.

Don Balon even suggest that the Spanish giants have a pre-agreement with the Dutchman, which would clearly be triggered once the Croatian makes his intentions publicly known.

To add to the intrigue, Martin Odegaard, currently on loan at Real Sociedad, is expected to return, so it’s patently obvious that Real Madrid need to do some serious housekeeping if they want to keep all of their squad happy.

With Ole Gunnar Solskjaer looking to rebuild his current United squad, news that he’ll potentially miss out on van de Beek is unlikely to go down well at Old Trafford.