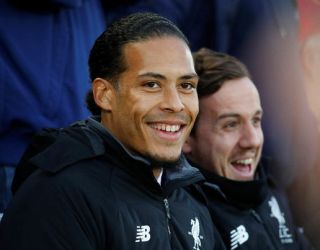 Former Chelsea defender Frank Leboeuf has suggested that Liverpool would have the best centre-back partnership in the world should they sign Napoli ace Kalidou Koulibaly, according to a recent report in the Express.

Koulibaly has been linked with a move to Liverpool and their Premier League rivals Chelsea and Manchester United in recent months, however, Leboeuf reckons that Old Trafford might not be the best place for Koulibaly to move to.

The former Blues centre-back has further suggested that a move to Anfield or Stamford Bridge would be a better career move for the Napoli defender.

Speaking to ESPN FC about Koulibaly’s future as cited in the Express, Leboeuf said:

“I will never ask him to go to Manchester United for many reasons,”

“I want him to win some stuff and I think Manchester United is not the club that they used to be and they’re not ready to win stuff.

“I think Liverpool would be a good fit with Van Dijk, that would be fantastic.

“Paris Saint-Germain as well with Marquinhos, there would be two great central defenders.

“I think Chelsea will need a player like that, I don’t know if Koulibaly will be interested, but even if they have two very good central defenders, Koulibaly I think belongs to another level and would fit very well.

“But definitely, I know he has a link with Liverpool, Van Dijk and Koulibaly at the back – my God, that’s going to be another Red season I guess.

“You have to make a choice at certain points. The question was ‘what is the best fit for Koulibaly?’ and definitely with Van Dijk, and when you’re a defender like Koulibaly, that would be the best central defence in the world,” he added.

It’s certain that should Koulibaly move to Liverpool, they would have one of the best centre-back pairings in Europe and the prospect of the 28-year-old centre-back pairing up with Virgil van Dijk is in itself a formidable pairing on paper, but Chelsea also are in need of a centre-back for all their defensive woes this season under Frank Lampard and the Napoli defender would be a great fit at Stamford Bridge as well.

However, Napoli’s huge price tag for Koulibaly could be a stumbling block for any intended transfer to prise the defender away from Naples this summer.