A lot of the reports surrounding Liverpool and Thiago Alcantara make it sound like a move could happen at any moment, but it doesn’t sound like things are that far down the road.

This video from Raphael Honigstein will feature mixed news for Liverpool fans who want this to happen, because it suggests things could happen but also that nothing is very close for now:

“Bayern are bracing themselves for Liverpool” 👀 Raphael Honigstein provides an update on Thiago’s situation at Bayern Munich when speaking on the latest Transfer Talk podcast. 🗣

The most notable part of this is the news that Thiago has rejected the new deal at Bayern and they believe he has a deal with someone else.

That suggests that he will be on his way this summer, but the acknowledgement that Liverpool haven’t made their move yet will raise some doubt over this.

He would bring a world class playmaking option to the Liverpool midfield that Jurgen Klopp doesn’t have just now, so he could make a great team even more formidable. 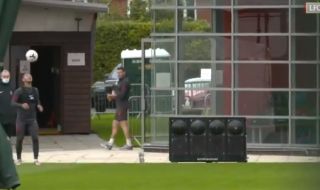