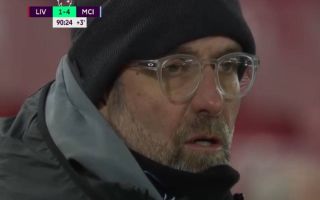 Liverpool have completely capitulated against Manchester City this evening, with #KloppOut, perhaps predictably, trending on Twitter.

The Reds headed into today’s game knowing that they needed a victory in order to keep their Premier League title hopes alive.

Despite having gone 1-0 down, Mohamed Salah’s penalty which made it 1-1 suggested that Liverpool could still have some fight left in the tank.

However, two catastrophic errors in possession from goalkeeper Alisson saw City stretch their lead to two goals, ending any hope of a Liverpool revival.

Phil Foden’s wonder-strike was the cherry on the cake for the visitors, but piled the misery onto Jurgen Klopp, who has seen his side lose three home games in a row.

Klopp’s Liverpool have been quite remarkable for the past few seasons, but they’ve dropped their standards considerably this term.

As a result, both Liverpool and rival fans on Twitter are calling for the German’s dismissal, so much so that #KloppOut has trended on the platform.

Is it time for him to go?

We need a coach with a brain. Not a very talkative coach #kloppout #LIVMCI

Players are against Klopp.

Klopp has lost the room

Board didn’t back Klopp

He is not managing the players very well, he lacks man management.

It’s with a heavy heart that I need to start doing this: #KloppOut