Free-falling Sunderland entertain Wigan at the Stadium of Light. 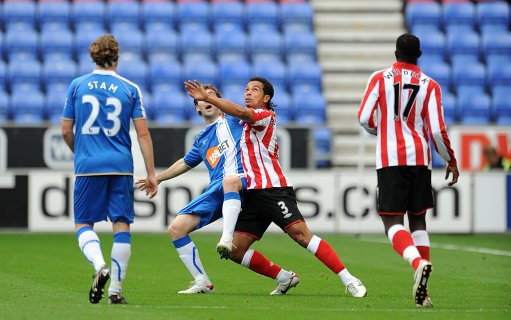 Sunderland will be looking to end their dismal run with a home win over fellow strugglers Wigan Athletic at the Stadium Of Light on Saturday (3pm K.O.)
Steve Bruce will be looking to bag all three points from his former club and pick up their first win in 9 games, a streak stretching back to the end of January.
Wigan boss Roberto Martinez seen his side climb out of the bottom three last week with a 3-1 win over Blackpool and the Latics are hoping to make it two wins on the bounce.
Team News
The Black Cats are without a number of first team players, including Titus Bramble (knee) and John Mensah (adductor tear) Fraizer Campbell and Craig Gordon will both face lengthy spells on the sidelines after both going under the knife for knee injuries.
Danny Welbeck (hamstring) and Kieran Richardson (calf) will be last minute decisions for Bruce.
Goalkeeper Trevor Carson has been recalled from his loan spell at Brentford as cover for Simon Mignolet.
Wigan have an injury free squad, but see Maynor Figueroa serve his second of a two game ban after collecting 10 yellow cards.
Prediction
Many reckon that this game has a draw written all over it, and perhaps even a Wigan win after their win over Blackpool and Sunderland’s win-less streak. But the Black Cats need to get a win from somewhere and where better than a home win over the Latics
Sunderland 2 – Wigan 1
More Stories Craig Gordon Danny Welbeck fraizer campbell John Mensah kieran richardson Maynor Figueroa Roberto Martinez Steve Bruce Sunderland FC Titus Bramble Wigan FC