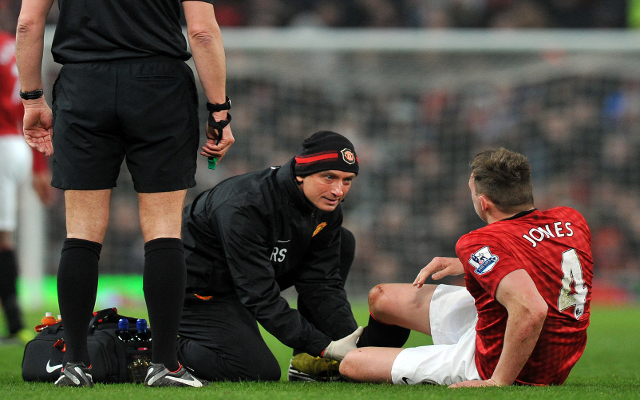 Phil Jones unlikely to be fit for Real Madrid clash at Old Trafford.

Manchester United utility man Phil Jones is losing his battle to be fit in time to face Real Madrid in the Champions League, manager Sir Alex Ferguson revealed on Thursday.

Jones left Old Trafford on crutches after suffering the injury in Manchester United’s 2-1 FA Cup victory over Reading on Monday night which booked a quarter-final date with either Chelsea or Middlesbrough.

Jones will definitely miss Saturday’s top versus bottom Premier League clash with struggling Queens Park Rangers, and it seems he is severely doubtful to make the return leg of the Champions League last 16 clash with Real Madrid with the tie finely poised after a 1-1 draw in the first leg.

“We are working very hard,” Ferguson told Sportinglife. “He has an outside chance for Real Madrid – no more than that.”

It has been Jones’ versatility that Manchester United have benefited from most since snapping him up as a teenage centre-back from Blackburn Rovers. He has not only starred in his natural position but also as a holding midfielder and at right-back where he played against Reading and picked the injury up in a challenge with Jobi McAnuff.

It is in the defensive midfield role that he has particularly excelled, and he was employed in that position to stifle Cristiano Ronaldo in the 1-1 Champions League draw with Real Madrid last week. Ferguson will be desperate to have Jones available for the return leg at Old Trafford.

Jones has also played as a midfielder for England, although was left out of Roy Hodgson’s most recent squad.