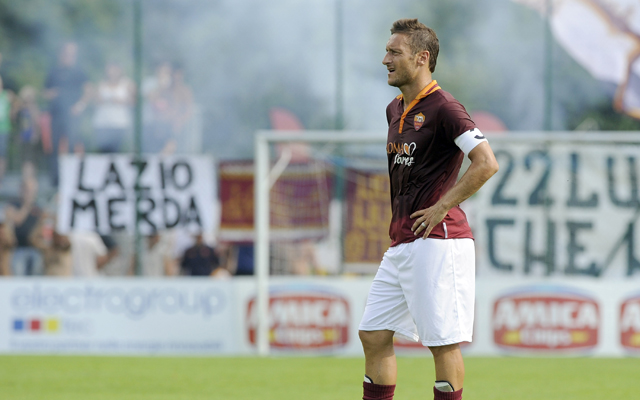 Talismanic forward signs on for even longer.

Check in to AS Roma vs Lazio

Roma legend Francesco Totti has penned a new two year deal with the club that will see him through until 2016, Sky Sports reports.

His new deal will mean the 36-year-old Giallorossi captain will end his career at the club where he has spent his entire career, and as he is turning 37 next week then the new deal won’t expire until he’s 39.

“I want to thank the (Roma) president (James Pallotta) for this contract,” Totti said in Friday’s press conference.

“In the end, this is what we all wanted, the club and I.

“I want to thank him (Pallotta) because this new deal gives me the opportunity to continue to wear the only jersey that I have loved and been a fan of.

“I have two more years of responsibility and I know that in these two years we will be able to do great things.”

Reports have suggested that the veteran forward has accepted a 30% decrease in order to agree the deal, but will earn €3.5m per season.

“I am honoured that Francesco will remain with us,” Pallotta added. “I want to raise our glasses for Totti and for Roma, for a radiant future.”

Totti has enjoyed a successful career with I Giallorossi, winning one Serie A title, two Italian Cups and two Italian Supercups.