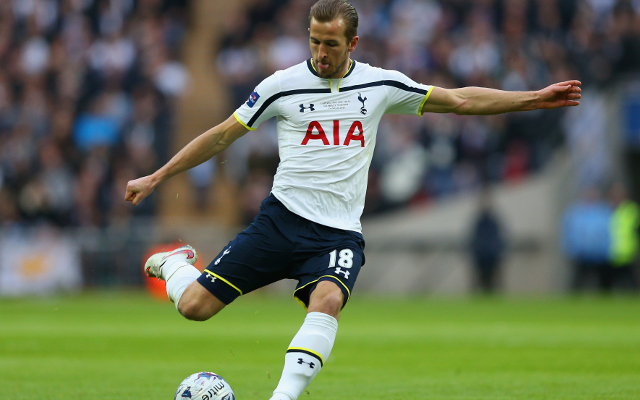 Tottenham Hotspur’s Harry Kane is, without doubt, the most in-form striker in England right now – despite his blank at Old Trafford on Sunday, he has netted 26 goals this season.

Kane has yet to represent his country at senior level, but he seems almost certain to be named in the next Three Lions squad – for the games against Lithuania and Italy.

Based on performances this season, there is no questioning that Kane deserves to lead Roy Hodgson’s attack in these matches.

However, it would better for his and England’s long-term future if he were to be left out by Hodgson until the start of next season.

Let’s face it – England don’t need Kane right now. They are more than capable of claiming maximum points against Lithuania without him, while their place at Euro 2016 seems virtually assured already, having won their qualifiers against Switzerland, San Marino, Estonia and Slovenia.

However, Gareth Southgate’s Young Lions do need Kane, badly. Furthermore, with him in the side, they would have a genuine chance of winning the European Under-21 Championships – a feat they have not managed since 1984.

If a group of young Englishmen can go all the way at what is generally considered to be the biggest youth tournament in the world, they will be much more confident and capable of being victorious when they eventually get their chance to shine on the biggest stage of all.

Kane has an excellent record for England. He is just five goals away from equalling Francis Jeffers and Alan Shearer’s all-time national Under-21 scoring record.

After beginning the 2014-15 season as a promising squad member at Spurs, Kane has quickly established himself as a week-in-week-out starter.

This has been his first full campaign as a first-team regular and he has already played 42 matches for Tottenham this term. As a hungry and committed young man, he will undoubtedly want to play as many games as possible. However, he must be protected.

Kane’s development could be compromised if he plays for England’s first team AND the Under-21s this season.

Hodgson should be brave and resist the urge to promote him just yet.

If Kane fires England to Euro 2015 glory, Hodgson will look like a genius for letting him remain with the Under-21s. If he doesn’t, Wayne Rooney will probably shine in his absence anyway, breaking Bobby Charlton’s goalscoring record, while Tottenham’s homegrown superstar continues to develop in humble, but very beneficial, surroundings.