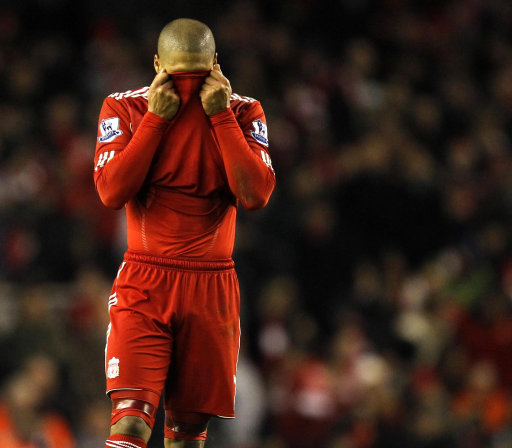 Barcelona may be on the lookout for a right-back this summer as the legendary Dani Alves nears towards the exit door with his contract running out this summer and no sign of a potential extension (via Daily Mail).

Despite not being able to sign players this summer, the Catalan giants are still looking for potential replacement and their search has taken them to Merseyside with reports linking Glen Johnson with a move to the Camp Nou (via Sport).

Given that these reports are surfacing from a Catalan newspaper, it can be viewed as a reliable story which makes the rumours even more baffling. However, when Barca’s history in the transfer market is examined, the four time European champions do make the odd signing every now and then.

Here is how Twitter reacted to the rumours linking Johnson to Barcelona:

Barcelona’s board needs to go. How will you be thinking of Glen Johnson? Did they curse you in your village? — #GraciasXavi (@Ms_daeze) March 28, 2015

Glen Johnson offered to Barcelona.. presumably to work in the club shop or something?

Glen Johnson offered to Barcelona and I have aspirations to take over as Obama’s successor.

Glen Johnson has offered himself for Barcelona as Dani replacement?! I can also offer myself to Barcelona!!! — erdi (@erMESSIdi) March 28, 2015

Glen Johnson linked with a summer move to Barcelona…. pic.twitter.com/IBuE1EtAYS

Have I woken in a parallel universe ? – Chelsea linked with signing Adebayor and Barcelona want to replace Dani Alves with Glen Johnson — Sport Uncovered (@SportUnc) March 28, 2015