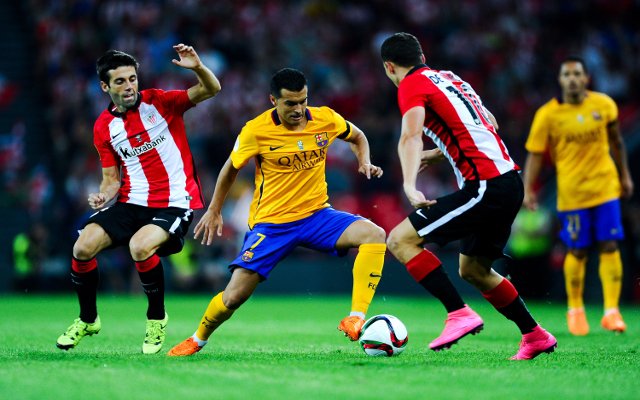 Manchester City are ready to turn their attention to Manchester United target Pedro if they fail to secure a deal to sign Wolfsburg playmaker Kevin de Bruyne, according to the Daily Mirror.

28-year-old Nou Camp star Pedro has seen his first-team chances restricted since the arrival of Luis Suarez from Liverpool, and as a hugely experienced forward, is surely too good to be left to warm the Barcelona bench.

Pedro has amassed 99 goals over the course of his nine years in the Barcelona first-team set-up, and has been hotly tipped to join United this summer, with some reports suggesting that a £22m fee has already been agreed (El Confidencial via The Daily Star).

Man City boss Manuel Pellegrini has been conducting something of a attacking shake-up at the Etihad Stadium this summer, with the big-spending Premier League side offloading Stevan Jovetic and Edin Dzeko whilst bringing in young England international Raheem Sterling.

In Man City’s opening Premier League fixture of the season, a comfortable 3-0 win away at West Bromwich Albion, Pellegrini fielded a three-pronged attack which saw Sterling on one flank and Jesus Navas on the other.

Pedro would arguably offer a stronger alternative to Navas, and according to the Daily Mirror, a move for the Barcelona star would be a far cheaper alternative to a move for first-choice target Kevin de Bruyne, with Wolfsburg as yet to respond following Man City’s £47m bid for the Belgian [also Mirror].