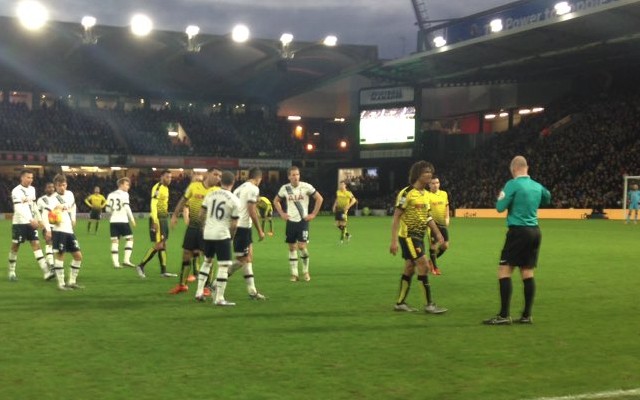 Watford pushed Tottenham Hotspur so close in the final stages of today’s game at Vicarage Road that it would be easy to forget that the Hornets had a numerical advantage.

But they did – as a consequence of Nathan Ake’s first ever red card, which occurred on 62 minutes for this ugly tackle on Spurs goalscorer Erik Lamela.

Ake was shown a straight red and, looking at the replay, it is hard to make a case for the Chelsea loanee’s defence.

The 20-year-old Dutchman has been in fine form since joining Watford from Stamford Bridge on a season-long deal in August.

He scored his first senior goal in a 3-0 win over Liverpool on Boxing Day, but he now faces a three-game ban if his tackle on Lamela is deemed as violent conduct.

Lamela opened the scoring for Spurs on 17 minutes before Odion Ighalo levelled for Watford just before half time.

Watford responded very well to Ake’s dismissal and they came within centimetres of taking the lead in the dying seconds. However, moments later, Heung-Min Son secured all three points for Spurs with a delicious back-heel against the run of play.