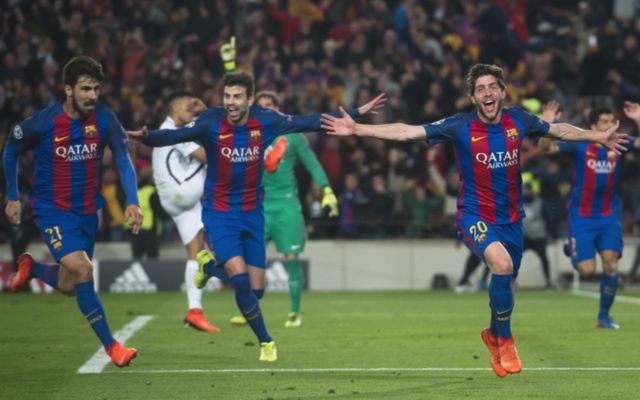 It’s not often that Real Madrid and Barcelona do direct transfer business, but there is a shock claim in Spain that Sergi Roberto is interested in a switch.

Given he’s only recently signed a new deal which will keep him at the Nou Camp until 2022, as per ESPN, it comes as an even bigger surprise that his future is even being discussed.

Discussed it is though as Diario Gol, as re-reported by The Express, claim that the issue stems from both clubs being interested in Real Sociedad’s Alvaro Odriozola.

A move to Barcelona could allow Roberto to play in his more favoured role in midfield, but the problem Diario Gol claim, is that he’s ‘very interested’ in a move to the Bernabeu.

It really would be a shock move as not only has Roberto come through the ranks at the Catalan giants, but he is playing a prominent role under Ernesto Valverde this season, making 36 appearances in all competitions.

In turn, there doesn’t seem to be a real motivation to want a move to their bitter rivals, and so unfortunately this claim really needs to be questioned.

Whether a move for Odriozola pushes him towards the exit door given it’s additional competition and could have a negative impact on his playing time is one thing, but to suggest that he holds an interest in a move to Madrid is a big statement.

Time will tell how the situation plays out, but as interpreted by The Express, Lionel Messi is concerned by it, so perhaps there is something of a headache there for Barcelona to deal with as they won’t want to lose him and not least to their rivals.

Barcelona to list midfielder for transfer – with contract set to enter final 12 months May 20 2021, 13:17
FC Barcelona

Barcelona will accept €60m for star this summer with emerging youngster to take his place in the squad Mar 10 2021, 17:04
Real Madrid CF