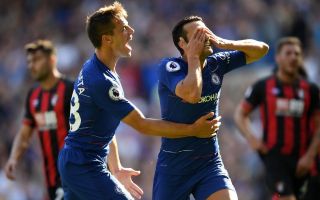 Chelsea beat Bournemouth 2-0 today to make it four wins out of four at the start of the season under new manager Maurizio Sarri.

Late goals from Pedro and Eden Hazard did the job against a resilient Bournemouth side, with Sarri clearly having a positive effect on a squad that struggled so much under his predecessor Antonio Conte last season.

Chelsea fans aren’t entirely satisfied, however, with many voicing the opinion on Twitter after the game that Pedro needs to be starting more games.

Some supporters were already displeased with Sarri’s selection before the match, highlighting Willian and Alvaro Morata as weak links in the team.

Pedro did come off the bench to score the opening goal, so he’s proven these fans right in a sense, with more than a few calling for him to become a regular starter and important part of Sarri’s side.

Also, out with Morata, Hazard should get the permanent no. 9 position. & Willian shouldn't start when Pedro is an option. Giroud, hmmm, work in progress, good team play from him though #CHEBOU ??

Y'all can see that Pedro is far more better than Willian

Another 3 points, get in! We should always start Pedro, fits our game way better than Willian. Willian can play the cup games instead!

Giroud and pedro should start ahead of morata and willian. Kepa is still yet to convince. Kante is just incredible. Hazard is priceless.. ???

Pedro has to start over Willian every game

Good win. Pedro ahead of Willian has to be a no-brainer for Sarri now. Likewise with Giroud over Morata. Espically if we start with that trio of CMs, who offer so much but not goals. Luiz needs to improve/replaced too.
4 wins from 4 though. Great start. Onwards & upwards #KTBFFH