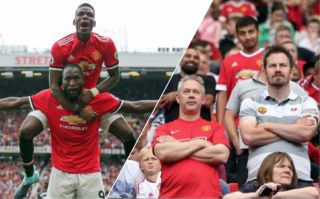 Manchester United have failed to break the deadlock against Burnley this evening, despite having golden opportunities to score in the first half of the tie.

Ole Gunnar Solskjaer’s tinkering with United this evening certainly hasn’t paid off, whilst they have enjoyed the majority of the possession against a defensive Burnley side, it looks as though as the Red Devils have lost the spark they had on Friday night.

Romelu Lukaku has so far struggled to build on the impressive performance that he delivered against the Gunners, the surprise inclusion of Andreas Pereira definitely hasn’t paid off, whilst I can sympathise that his role in the team may not be his preferred one – he looks as though he is well out of his depth.

In-form forward Marcus Rashford has had the best chance of the half but squandered it:

UNITED FANS TOLD ME I SHOULD BE WORRIED ABOUT RASHFORD LMAOOO pic.twitter.com/e95SwpwATy

Pereira has received the majority of the criticism from United fans, check out some reaction below:

Can we put Lukaku on that Plane to China with Fellaini. ?????#MUFC

Take off Andreas P.. He is not ready

This is not good

Pereira should be released from his contract at half time.

He has been a bystander, i think he only made one forward pass the whole half, herrera needs to come on for him asap

Pereira is overrated. He can go lmao. Lukaku and mata needs to be subbed out for Sanchez and Jesse

United need to step their game up in the second half, with some extremely challenging fixtures coming up for United over the next month they really need three points against a team that are relegation candidates this season.