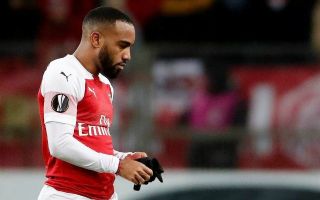 Arsenal manager Unai Emery has revealed he had a chat with Alexandre Lacazette about controlling his frustration after he got himself a late red card in the defeat to BATE Borisov.

The Gunners had an evening to forget in Belarus as they fell to a 1-0 defeat in the Europa League, with Lacazette seeing red late on for an elbow on an opponent that will now see him miss the second leg at the Emirates Stadium.

MORE: Alexandre Lacazette breaks silence on moment of madness that led to red card for Arsenal vs BATE

Emery did not look happy as Lacazette received his marching orders, and the Spaniard revealed after the game that he had a word with the France international about having to control himself more.

‘I didn’t see the action but we spoke and [his] frustration needs controlling. It’s bad news with the red card,’ Emery said after the game, as quoted by the Daily Mirror.

Lacazette certainly seemed to look a tad out of control as he lost his temper on the pitch, but he’s harmed his side’s prospects of progressing in the second leg by putting himself out of contention to play in it.

Arsenal fans will hope Emery surely still has a strong enough squad to get a convincing win when these two teams meet again.