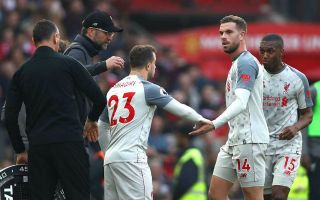 Liverpool manager Jurgen Klopp has attempted to clear up stories of a dressing room bust-up following the club’s 0-0 draw with Manchester United on Sunday.

The Reds boss did not look a particularly happy man at the final whistle, as he appeared to mouth “f**cking hell what a s**t game” as he shook hands with Ole Gunnar Solskjaer.

MORE: Liverpool and Chelsea in battle over bargain £25million transfer

Earlier on, Klopp could also be seen looking less than impressed with club captain Jordan Henderson when he subbed him off.

It was then claimed in a report from the Sun that Klopp went ballistic at his players in the dressing room afterwards, particularly at Henderson and Sadio Mane.

However, the German tactician has since slammed this report as “bulls***” as he insists Henderson wasn’t even there due to getting drug tested.

“I could have shouted, but Hendo wasn’t even there! He was being drug tested.

“Nothing. It’s bulls***. Nothing happened after the game, we were completely fine. We spoke abut the game and the opportunity we had, things we did, and then we drove home.”

Liverpool fans will be relieved to hear their manager deny this post-match meltdown as this squad really needs to keep things together if they are to keep their lead at the top of the Premier League table and end their 29-year wait for the title.