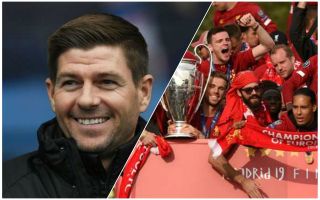 Steven Gerrard has lavished Jordan Henderson with praise after leading Liverpool to a successful end to the season in the Champions League final.

The Merseyside giants secured a 2-0 win over Tottenham in Madrid on Saturday, lifting their sixth European Cup as they put their Premier League title disappointment behind them.

It could now mark the beginning of a trophy-laden spell for Liverpool given the quality of the squad that Jurgen Klopp has built, but Gerrard was keen to single one man out in particular.

Jordan Henderson has emerged as a real leader for the club, and the emotions in his celebrations as he lifted the trophy were undoubtedly a reflection of the feelings among Liverpool fans at the weekend.

“If I had to name someone I regarded as the ultimate professional, Jordan would be right at the top of the list,” he told The Times. “He is immaculate in the way he lives his life. Some people don’t see the stuff behind the scenes, the gym work, the way he eats, but he is someone who is an incredible role model.

“He is selfless. He is someone who puts himself at the back of the queue because he looks after everyone else first. He puts Jordan Henderson last. All of that is important but, of course, he is a top player as well.

“He has running power, you can trust him with the ball, a good range of passing and, over the last few months, has risen to the challenge of pushing Liverpool forward and come right into top form. That is the key. You don’t last at Liverpool just by being a top guy.”

The 28-year-old wasn’t always a permanent fixture in the line-up this season, making 44 appearances across all competitions while scoring one goal and providing five assists.

Nevertheless, that never affected his commitment, desire and hunger to lead Liverpool to success this past year, and ultimately he has risen to the occasion and played a fundamental role in their progression to establish himself as a key figure for Klopp.

He’ll hope that the Champions League trophy is the first of many that he gets to lift as Liverpool captain moving forward, and he’ll surely be delighted with the glowing words of praise from Gerrard noted above as that will mean a lot coming from the former Reds talisman.