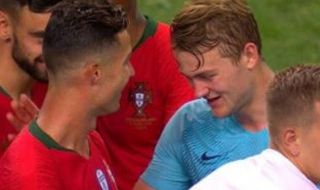 Despite leading Portugal to UEFA Nations League success on Sunday, Cristiano Ronaldo seemingly had Juventus transfer plans on his mind.

Portugal secured a 1-0 win over the Netherlands on Sunday to win the inaugural Nations League after seeing off Switzerland in midweek, and in turn enjoyed celebrations in Porto as they added another trophy to their collection after winning Euro 2016.

However, Ronaldo’s focus switched from that to possible Juve reinforcements this summer, as De Ligt has revealed that the 34-year-old jokingly asked him if he was moving to Turin amid ongoing speculation over his future.

“Are you coming to Turin?” a smiling De Ligt revealed after the game, as per Mundo Deportivo. “I didn’t understand at first. It surprised me a little, it left me a little in shock, so I laughed. But I did not answer anything.

“I don’t care about that now. The transfer window isn’t open yet, so first I’ll go on holiday and rest. Then I’ll see.”

As noted by The Mirror, several European giants are said to be interested in the Dutch starlet, with Man Utd, Liverpool, Barcelona and Paris Saint-Germain all credited with potentially making a move this summer.

It comes as no surprise though given the impact and influence that the 19-year-old has had for club and country this past season, making 55 appearances for Ajax to lead them to a domestic double and the semi-finals of the Champions League.

Further, he already has 16 caps to his name for the Netherlands, and so there is little doubt that he has a big future for club and country ahead of him.

Ronaldo seemingly wants him in Turin with him at Juventus, but although Calciomercato have previously linked the Serie A champions with a swoop, it remains to be seen if they can push their way to the front of the queue.