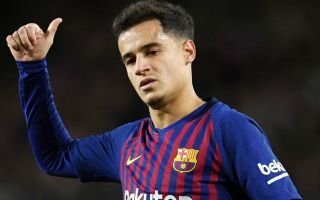 In a surprise twist to the Philippe Coutinho transfer saga, it looks as though the Barcelona attacking midfielder will reportedly be staying at the club this summer.

The Brazil international has struggled since joining Barcelona from Liverpool, and many reports had long suggested he could be on his way out in this transfer window.

However, according to Mundo Deportivo, who mention links with Manchester United and his former club Liverpool, it looks like the £110million-rated star is now looking increasingly likely to stay where he is.

The report explains that no formal offer has come in for Coutinho, which is perhaps a surprise given his apparent availability and his previous form at Premier League level.

Despite his dip at Barca, the 27-year-old was world class for Liverpool and would surely still get into Jurgen Klopp’s starting XI.

Man Utd, meanwhile, have been linked with other attacking midfield players such as Bruno Fernandes by i News and others, and could clearly benefit from someone like Coutinho coming in as an upgrade on the likes of Alexis Sanchez and Juan Mata.