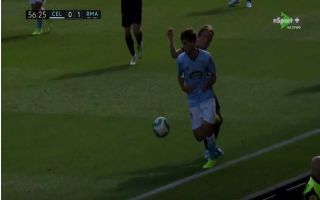 It might be one of the most irritating cliches when someone bemoans “they’re not that type of player” in an attempt to defend a poor challenge for a red card. Luka Modric could fall under that category only this time the red card decision does look to be a bit harsh.

He was shown a straight red card against Celta Vigo for a challenge on Denis Suarez. He does catch his ankle in what looks like a sore one but the challenge looked pretty innocuous.

Modric will win that appeal. That was a bullshit red card. Yellow? Yes

Yea it was a late tackle …but I’m stil amazed at the VAR induced red card for Modric .

A tweet from Squawka confirmed it was the first time the Croatian was shown a red card in his professional career.

Luka Modri? has been shown a straight red card for the first time in his 16-year senior career.

Just the second time he’s been sent off. ? pic.twitter.com/U3td858xxd

Fortunately for Real Madrid Toni Kroos scored a second goal minutes after the sending off so they look set to win the game.