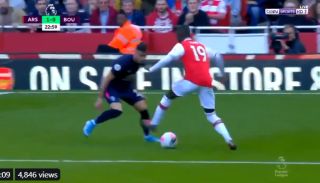 Arsenal forward Nicolas Pepe looks to have been denied a fairly obvious penalty in today’s game against Bournemouth.

The Gunners are 1-0 up at the time of writing so won’t be overly concerned at the moment, but this does look a decision that might potentially come back to haunt them.

HOW IS THIS NOT A PENALTY? pic.twitter.com/kNncJ2bdem

Watch the clip above as Pepe breaks into the box before clearly being brought down by his opponent, who trips him without getting anywhere near the ball.

It really is hard to fathom how the referee would just let this go, but Bournemouth can breathe a big sigh of relief and hope it gives them a chance to claw this game back.