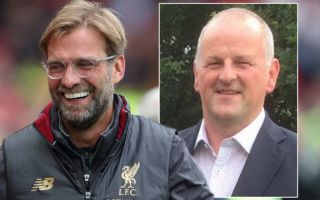 Jurgen Klopp has admitted that he’d love to meet Liverpool fan Sean Cox following the news that the Red supporter is to make his Anfield return after an 18 month absence.

According to BBC Sport, Cox is set to be at Liverpool vs Man City at Anfield this Sunday, which’ll be his first match since he sustained serious brain injuries after being attacked ahead of Anfield before his side’s clash against Roma back in April 2018.

BBC Sport’s report also notes that Cox, and his family, are set to be guests of the club for their match against Pep Guardiola’s side this weekend, thus it’s sure to be an emotional occasion for all involved.

And ahead of Cox’s Anfield return, Klopp offered to meet the Reds fan at some point on Sunday during an interview with Sky Sports.

And heard in an interview with Sky Sports, which can be also viewed here as well as down below, Klopp has offered to meet Cox at Anfield on Sunday, with the German stating “If I have the opportunity, whenever around the game, I would really like to see him”.

"If I have the opportunity I would really like to see him." ?

Jurgen Klopp says he hopes to meet Liverpool supporter Sean Cox when he returns to Anfield on Sunday for the first time since sustaining serious injury in an attack by Roma supporters.

This is a lovely gesture from Klopp, one we’re sure Cox and his family will surely take up given all they’ve been through these past 18 months or so.

Given that Cox is going to be at the game, we assume Liverpool’s players are going to try their absolute hardest in order to win the game and make Cox’s Anfield return a day to remember for all involved with him and the club.

Jurgen Klopp, what a man!