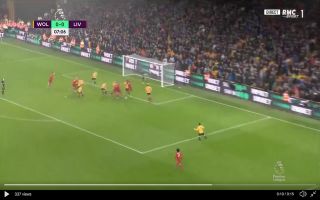 In the 7th minute of this evening’s Premier League clash between Wolves and Liverpool, the Reds took an early lead after a corner.

Star full-back Trent Alexander-Arnold whipped in a dangerous out-swinging corner towards the near post and Jordan Henderson rose highest to head the ball into the back of the net.

Wolves’ focus on Liverpool’s prime aerial threats like Virgil van Dijk allowed the England international to charge towards the near post without being tracked.

Check out the Liverpool skipper’s opener below:

Liverpool have established themselves as a dangerous side from set-pieces since Jurgen Klopp’s arrival.