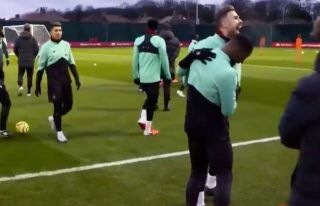 There has been a lot of talk over Georginio Wijnaldum’s future at Liverpool in recent weeks, but it seems these eagle-eyed fans may have heard a major hint from the Dutchman himself.

With 18 months remaining on his current deal, there may be a slight concern over his long-term future at Anfield as it’s always a worry when a player enters the last year of his contract.

SEE MORE: Liverpool team news: Double boost for Klopp vs Southampton, but trio to miss out

Nevertheless, with Liverpool chasing major trophies this season still, it doesn’t seem to be the right time to discuss it, but now the midfield ace has excited some Liverpool fans with a potential hint over his future.

As noted by TeamTalk, it has been suggested that Wijnaldum will sign a new deal but there is still an agreement needed on the length of the contract before it is signed.

It’s claimed that given he is now 30 years of age, that could be the sticking point in negotiations, but the feeling is that a compromise will be reached eventually.

Now, this particular Liverpool fan in their tweet below has spotted something of real interest as during an interaction with skipper Jordan Henderson, Wijnaldum can be heard saying: “I extended”.

It’s obviously unclear if he is referring to his contract or not, but these fans in the comments below on the tweet have certainly interpreted that way…

Gini to Hendo – “I extended”

I wonder what he could be talking about here! ?pic.twitter.com/AAGEfDkctY