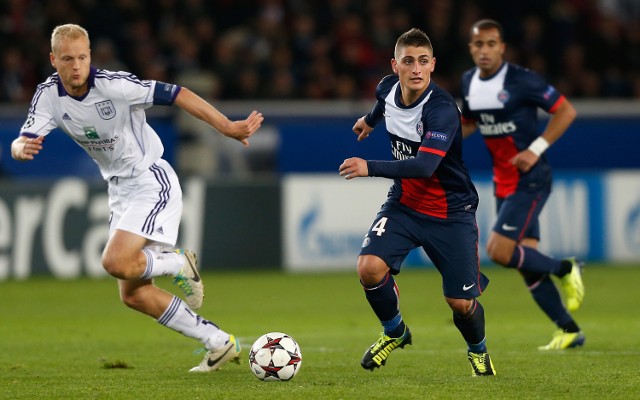 Azzurri player is believed to be unhappy with life in France.

Check in to Tottenham Hotspur vs Manchester United
La Liga giants FC Barcelona are planning on swooping for unsettled Paris Saint-Germain midfield player Marco Verratti when the winter window reopens at the turn of the year in a move that will put Premier League champions Manchester United on high alert, according to reports in French sports daily L’Equipe.

The Spanish giants have recently sent scouts to the Parc des Princes to check on the form of the Italy international as Barca ponder whether or not to sign Verratti in January.

And this latest transfer development will have caused great concern at Old Trafford, as new Red Devils head coach David Moyes is known to be a huge fan of the 21-year-old himself, with the Scot also expecting to make his own move for Verratti come the new year.

As a result, it now looks like the two giants of European football will go head to head in a battle to sign Verratti, although the player does have a long-term contract at the Parc des Princes that runs until June 2018 after the Italian recently extending his deal with the Ligue 1 champions.

Consequently, it is believed that either side would need to fork out at least £18 million in order to convince the mega-rich Parisians to allow Verratti to leave the French capital in the winter window.