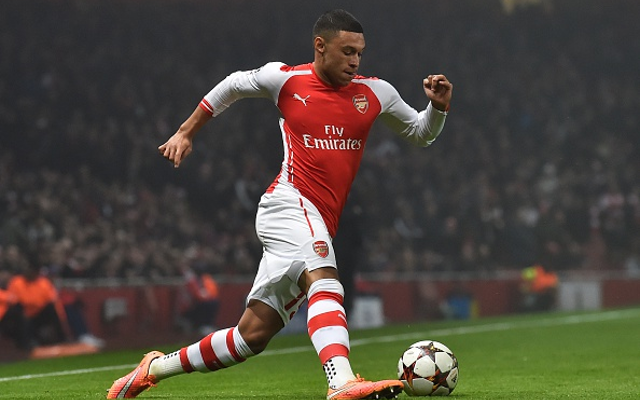 Arsenal legend Thierry Henry has been an inspiration to Alex Oxlade-Chamberlain, but he is hoping to emulate this Dutch international playmaker…

Alex Oxlade-Chamberlain claims he was inspired by Arsenal legend Thierry Henry, but is moulding himself on top central midfielders like Wesley Sneijder, reports the Daily Mail.

The 21-year-old looks to be in the midst of a breakout season with the Gunners, and injuries to the likes of Theo Walcott have given him the chance to cement a regular spot in the first team. He has been deployed largely on the right wing this campaign, but the young Englishman sees himself eventually moving permanently infield.

Chamberlain trained with Henry when Arsenal’s record goalscorer returned to the club on loan in 2012, and he claims that he learnt a huge amount from the French star.

With the pacey youngster targeting a central midfield role in the long term however, he has been studying a number of other top European stars recently in the hopes of picking up some tricks.

Barcelona star Andres Iniesta and Liverpool’s Steven Gerrard are two such players, but it’s Netherlands international Wesley Sneijder that has impressed him the most.

“He doesn’t play as deep but he finds really good pockets in midfield, he turns and, whether he is going to shoot, pass or run with the ball, he causes problems.

“I would love to get to there, to have the career that he has had. Players like that you watch.”

Chamberlain was one of the shining lights during Arsenal’s poor start to the season, and will be hoping to continue his growth and become the player he has the potential to be.