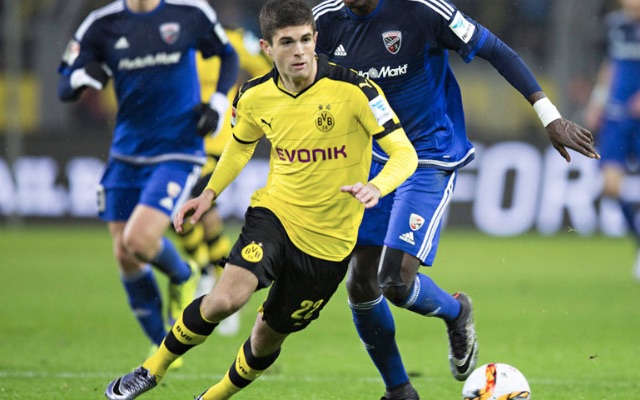 Liverpool‘s hopes of signing Borussia Dortmund wonderkid Christian Pulisic have been dented by news that Manchester City and Real Madrid are also keen in the teenager.

According to the Daily Mail, the Reds are eyeing a move for the 17-year-old, who is enjoying his first spell in the BVB first team.

He became the youngest player in the history of the German top flight to score two goals when he found the net against Stuttgart recently, having already become the youngest-ever non-German to bag a goal in the Bundesliga.

The starlet is already a United States international—who made his debut for the USMNT in March—and appears set for a long and glorious future in the game.

His promise has alerted several of Europe’s giants—as well as New York City FC in Major League Soccer—and don’t be surprised to see Pulisic emerge as one of the key transfer subplots of the summer window.

While Klopp may be hoping to count on the Dortmund connection to lure the wonderkid to Anfield, he faces heavyweight competition from both Real Madrid and Manchester City according to the Daily Mail.

However, don’t count out Pulisic opting to remain with Dortmund, at least for a few more campaigns, with the German giants having a fine recent record of cultivating young talent and helping promising players realise their potential.