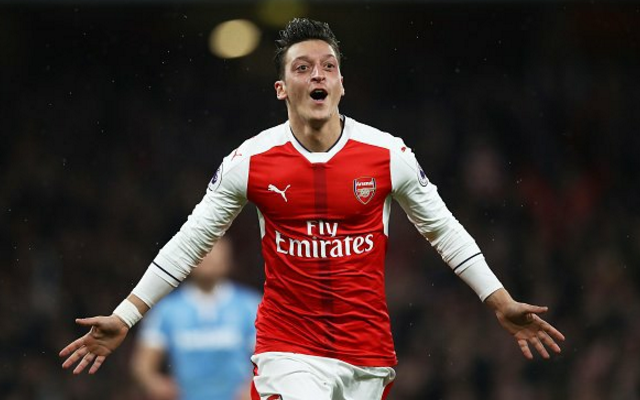 Arsenal scraped past Stoke City to ensure that they kept pace with Premier League leaders Chelsea going into the Blues’ match-up with West Brom on Sunday.

It was Stoke who took the lead at the Emirates. Joe Allen fell under a clumsy challenge from Granit Xhaka, and the referee pointed to the spot. Charlie Adam made no mistake, firing low and sending goalkeeper Petr Cech the wrong way. (click here to see Adam’s thumping penalty)

The Gunners found an equaliser through Theo Walcott. A smart pass from Alexis Sanchez played Hector Bellerin in downt the right hand side of the penalty area. His cross was met by Walcott, who found the back of the net for his 100th career club goal. (click here to see Walcott’s 100th club career goal)

Mesut Ozil then gave Arsenal the lead with a rare header. It was a significant one too, as he has now bettered his goal-scoring tally for the entirety of last season. He scored eight goals in 40 appearances last time around, he has already scored nine this term in 20 games. (click here to see Ozil’s deft header)

Nigerian yongster Alex Iwobi added a third late-on to ensure that Arsenal were to secure all three points against a stubborn Stoke side. (click here to see Iwobi’s goal)

Man of the match – Mesut Ozil: It was by no means one of Ozil’s best ever performances, but as is becoming a common theme of Arsenal’s season, it was a moment of quality from the German that proved to be a decisive moment in the match.